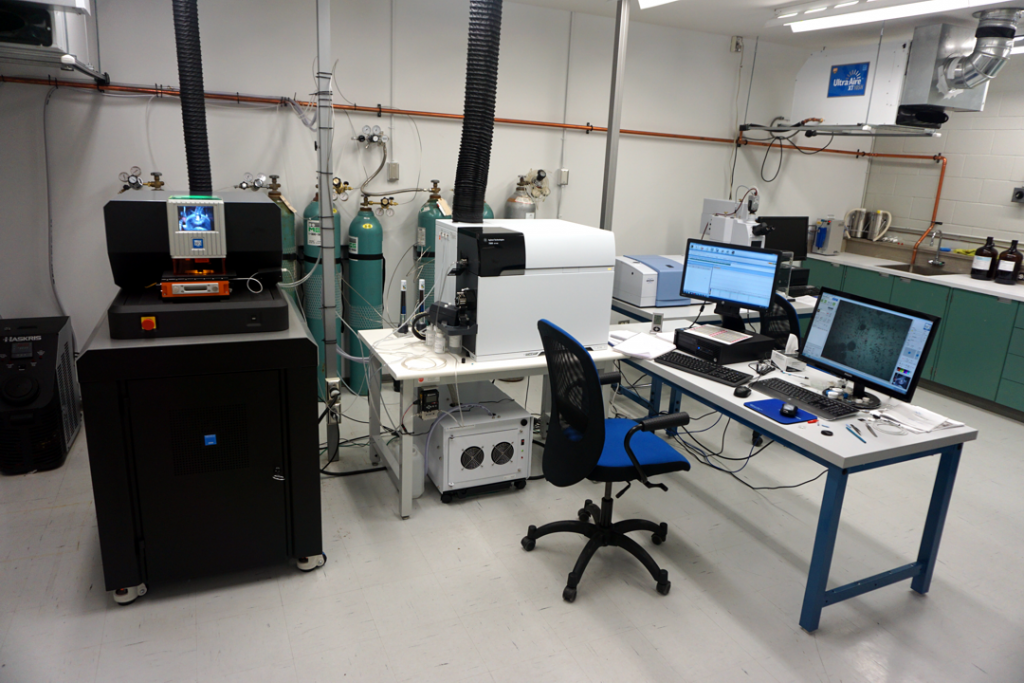 The LA-ICPMS laboratory consists of an NWR 193 UC laser ablation system and an Agilent 7900 quadrupole mass spectrometer. The laboratory was optimized to provide exceptional performance for the analysis of fluid inclusions and silicate melt inclusions in minerals; however, it provides top performance for the analysis of a very broad range of materials. Other typical application areas include the in situ determination of trace and major element composition of minerals, U-Pb dating of zircons and other accessory minerals, trace element mapping, depth profiling, characterization of the composition of non-geologic materials from material, engineering and life sciences. 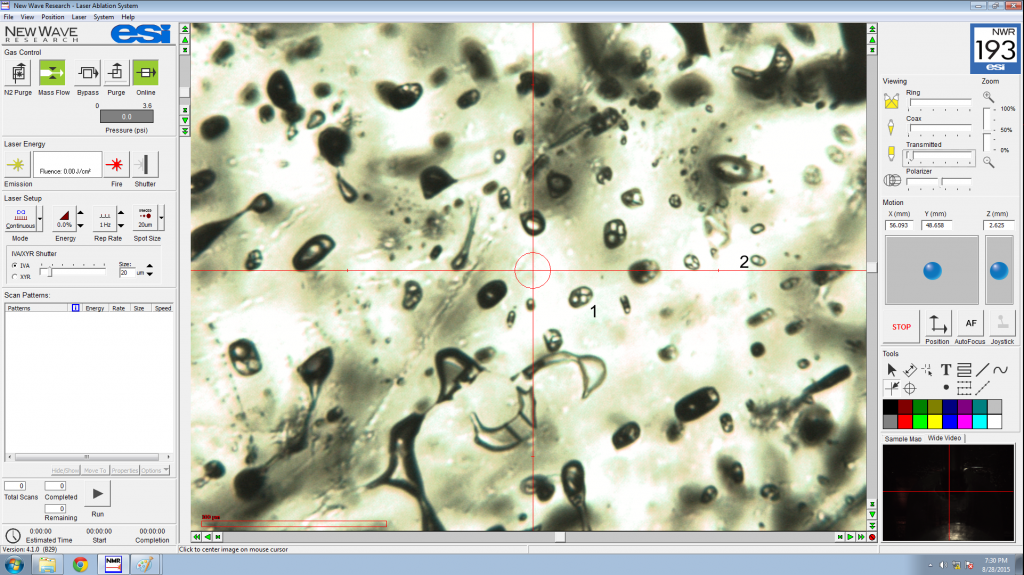 Screenshot of live image from the ActiveView software of the NWR 193 UC laser ablation system. The scale bar is 100 μm long, whereas the circle around the crosshair is 20 μm in diameter. The salt crystals in brine inclusion (1) are about 3 μm in diameter, whereas vapor inclusion (2) with clearly distinguishable vapor bubble and liquid phase is only 6 μm along its long axis.

Sensitivity and limits of detection

This instrument is solely used in laser ablation mode and much attention is paid to maintain very low gas blanks (0-4 cps on most heavy masses). This combined with the high sensitivities of the Agilent 7900 allows us to achieve sub ng/g detection limits for many elements even at routine analysis conditions. Please see the figures below and the supporting material for detailed information on sensitivities, gas blanks and detection limits. 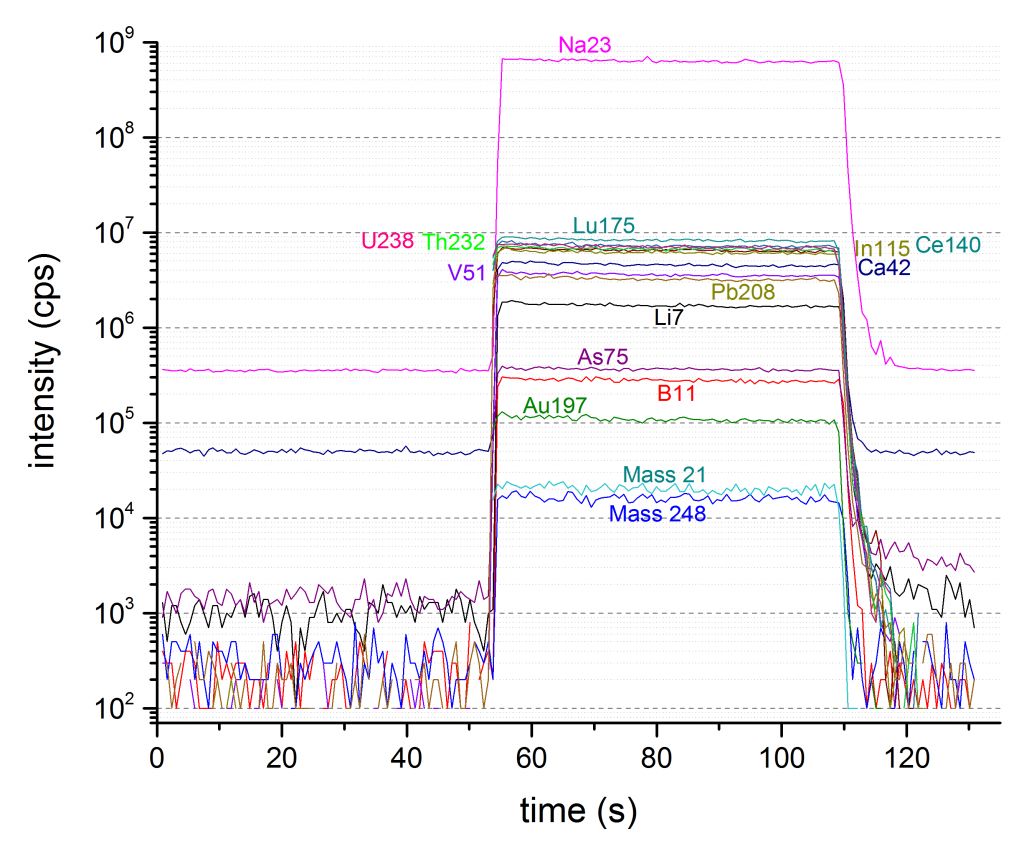 Line analysis of the NIST610 glass with a 40 μm diameter circular beam at 1.5 μm/s ablation rate (6 J/cm2, 10 Hz). Note that the gas blanks for many heavy elements are not observable because they are at the 0-4 cps level.  The instrument was tuned to ThO / Th ~ 0.3%, Mass 21 / 42Ca ~ 0.35%, 238U / 232Th ~ 1. This performance is achieved without the addition of N2 or H2 to increase sensitivities, thus no additional interfering polyatomic species are created. A glass signal smoothing device was employed. 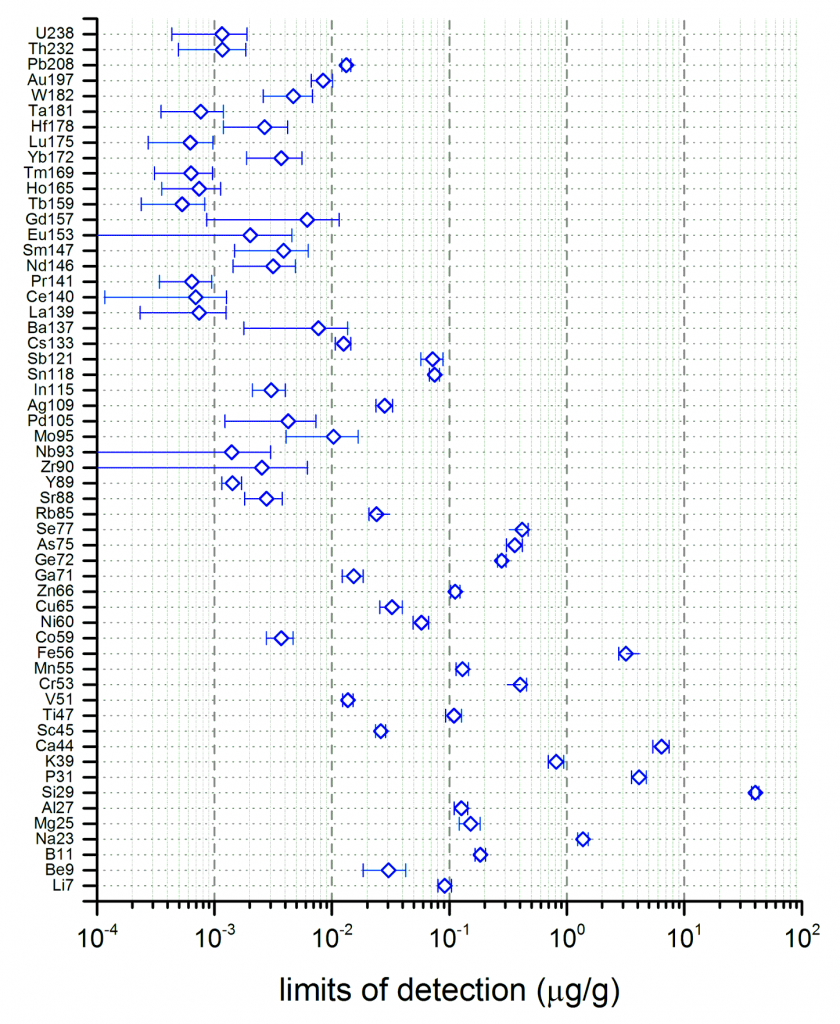 Limits of detection obtained using 40 μm diameter circular beam, 10 Hz ablation rate and 5 J/cm2 energy density (~1.3 μm/s ablation rate) on basaltic glasses. Approximately 40 s background and 40 s signal integration intervals were used and 56 elements were analyzed at the same time. Dwell times for each mass were 10 ms. Note that by increasing the beam diameter or the dwell time on specific isotopes, the above reported values can be further improved. The 3 sigma background standard deviation criterion was used for the calculation of detection limits. The average detection limits from 10 analyses are shown, whereas the error bars reflect the standard deviation around the average.

The NWR 193 UC platform allows direct communication with the Agilent 7900, therefore fully automated data acquisition is possible from up to hundreds of pre-set analysis sites. The long-term reproducibility of the motorized stage is 4 μm. The washout time to background level is <5 s without, and <10 s with the signal smoothing device allowing for short wait time between the pre-set analyses.

The layer management tool in the NWR software allows importing scanned sample images, which can be linked to the sample position using two reference points, and subsequently used for orientation. The stage will move to any site selected by simply clicking on the scanned image. Similarly, sample images generated by other instrumentation (e.g. cathodoluminescence) can also be imported and used for orientation.

The size of the ablation cell is 100X100 mm, which allows simultaneous loading of 6 geologic size thin sections and several standard reference materials. The sensitivities are uniform over the entire ablation cell thanks to the two-volume design. Samples as tall as 2 cm can easily be accommodated in the ablation cell by lowering the adjustable bottom plate.

The instrument has been configured to provide excellent performance in fluid inclusion and silicate melt inclusion analysis. A custom made aperture wheel allows rapid stepwise beam opening commonly required for optimal fluid inclusion ablation. The short pulse-width excimer laser facilitates controlled ablation of quartz. The combination of the iris and XYR apertures allows for matching the size and shape of silicate melt inclusions. Any circular beam can be used between 1 and 150 μm diameter with single micron steps, while rectangular beams are available with independently variable X and Y dimensions between 1 and 110 μm and with any degree of rotation. 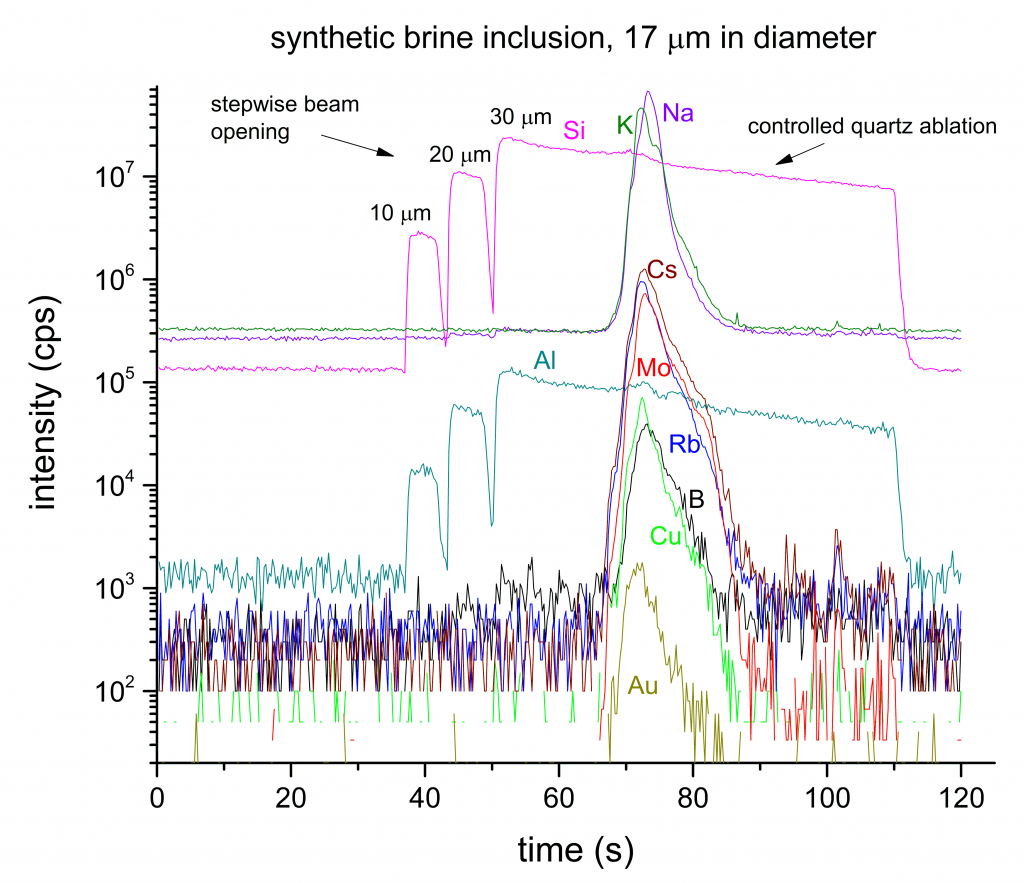 The transient signal of a 17 µm-sized synthetic brine inclusion at 30 µm depth below the sample surface. Observe the stepwise beam opening with fast aperture switching (< 2 s), which is a custom made feature of this system. Stepwise beam opening is required for proper fluid inclusion analysis, either before hitting the inclusion or even during the ablation of inclusions situated close to the sample surface. The smoothness of the Si and Al signal shows the controlled ablation behavior of quartz. High sensitivities are apparent considering the size and composition of the ablated brine inclusion (cAu=7.5 ppm, cB=1159 ppm, cCs=1867 ppm, cCu=578 ppm, cMo=788 ppm, cRb=2159 ppm, cK=131000 ppm, cNa=161000 ppm).

The short pulse-width excimer laser in combination with the robust plasma of the Agilent 7900 allows for fairly high level of matrix independence as demonstrated by the below figures. Therefore, for most common silicate minerals and glasses, the quantification of the LA-ICPMS analysis is possible using the total of the major element oxides as internal standard. Thus, no preliminary analysis of the investigated materials is required by an independent technique to obtain an internal standard. This also allows obtaining the bulk composition of materials with micro-scale heterogeneity (e.g. fine groundmass in volcanic rocks, symplectites) by using large beam diameter or line/raster analysis. 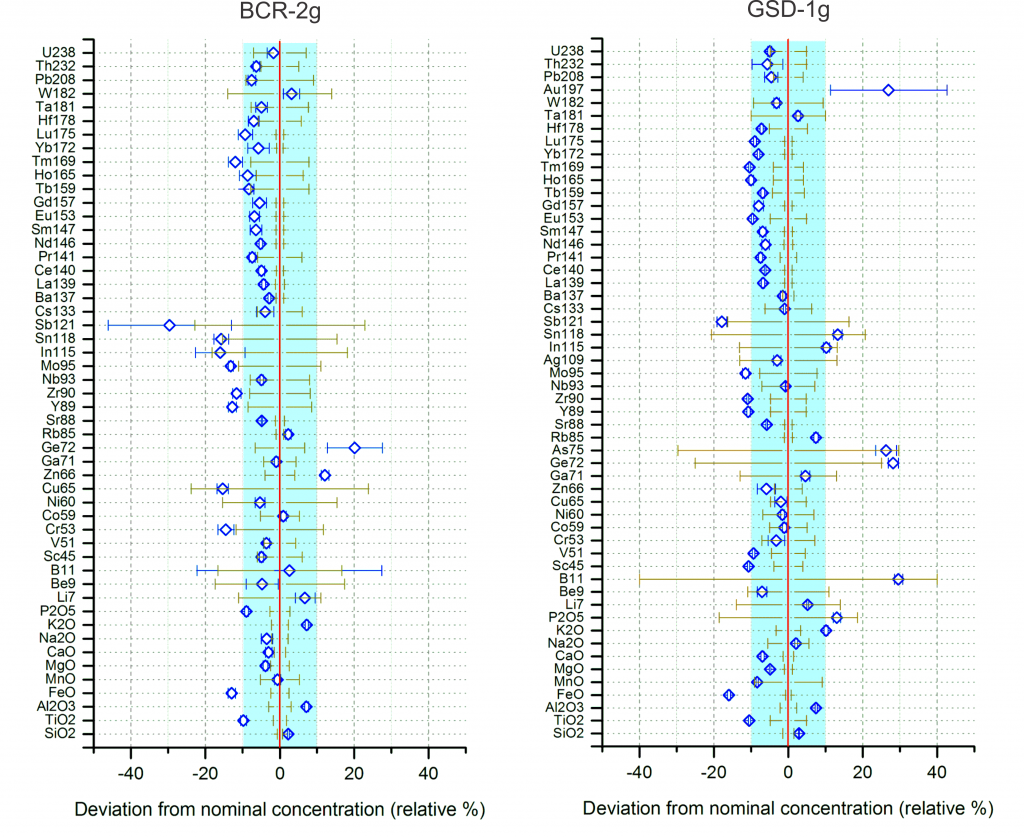 The USGS BCR-2g and GSD-1g basalt glass standards quantified using NIST 610 as the external standard. The blue symbols show the results with 1 σ standard deviation on the average of 5 analyses shown by the blue error bars. The preferred values of the GEOREM database were used as reference. The green error bars show the uncertainties on the nominal concentrations as provided by GEOREM. The total of major element oxides were used as “internal standard”. Note that these basaltic glasses are rather different from the NIST610 standard in major element composition. 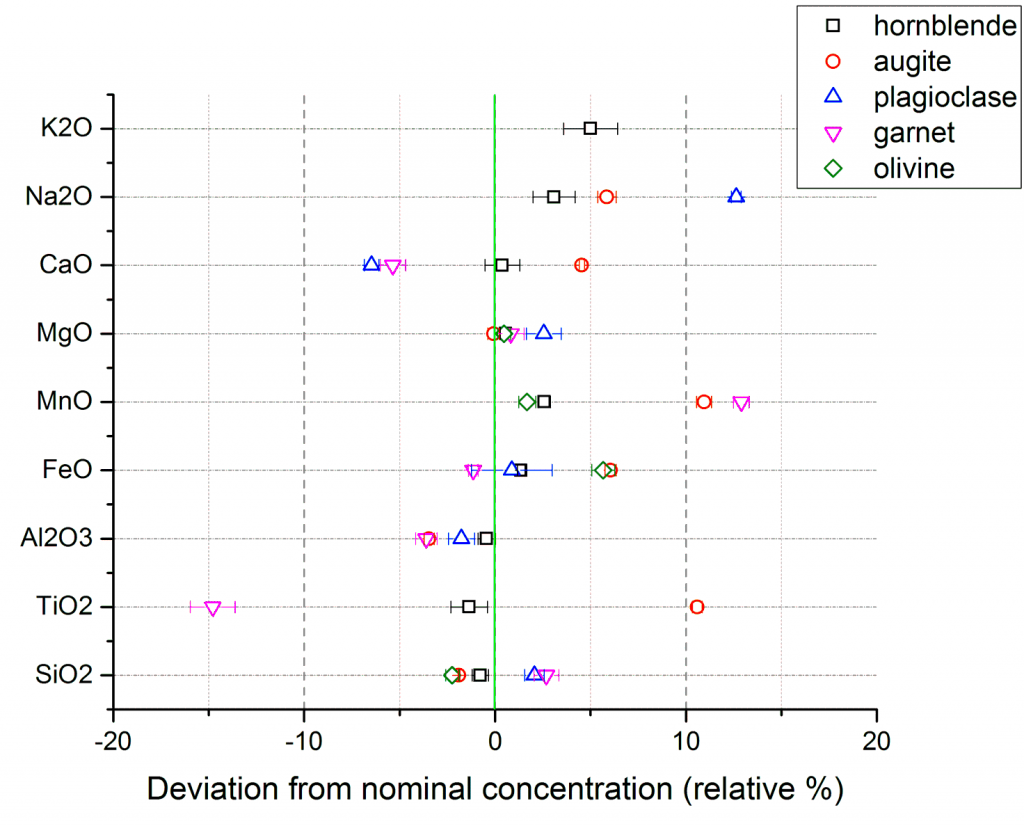 The accuracy of major element concentration determination in various silicate minerals using GSD-1g as external standard. Smithsonian reference minerals were used for the test and the provided nominal compositions were used as reference.